Teamwork – Time for a Health Check-up 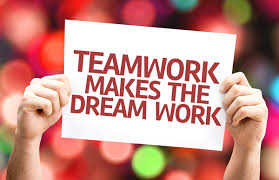 The business world is increasingly moving away from individual performance as the basis for success, and moving towards the team being the most common unit of production.  Assembly lines of individual workers are giving way to manufacturing cells  –  smaller internal factories operated by small teams of workers.  This trend is happening  in many other sectors, from health care to education, from sales to financial services.  The Independent worker is being replaced by an inter-dependent team.  The increasing complexity of task and volume of work will keep us moving in this direction.

The work of business has become a team sport – not an individual sport.  Businesses comprised of brilliant individuals who are capable of accomplishing  great things on their own will not power an organization or a business to success in the longer term.    Great individual players on poor performing teams do not generate great results.   Professional coaches in team sports, (like the Canadian NHL Teams this spring)  painfully know this. However, this is tough for business leaders to accept, especially when they put so much effort into recruiting and selecting the best available individual talent to join their businesses.

So let’s go to the source of true information and explore some recent survey findings of employees speaking about their team experiences in the workplace .

Question:  “When co-workers admit to their mistakes, does this make you more likely to trust them ?”  84% of respondents answer yes to this question.  When team members hide their mistakes, or feel inhibited about asking for help when they need it, the performance of the team suffers.  At the root of this reluctance is the fear of being vulnerable  – a lack of trust that other members of the team ‘have their back’ and will come to their aid.  This fear of being vulnerable holds many teams back from achieving their full potential.  The presence of strong inter-dependent trust is one of the key  foundational stones that high performance teams are built on.

Question:  “Do you think that your team would be more effective if people were more frank with their opinions?”  71% of respondents answer ‘yes’ to this question. People hold back from frank or ‘straight’ talk when there is a fear that this will cause conflict in the team.  The lack of sufficient trust in the team creates an atmosphere of vulnerability, which leads to avoidance of discussions that might cause tension in the team.  The resulting sense of harmony and peace is artificial and very detrimental to teams performing at higher levels because the topics that need be aired are difficult to bring to the table.

Question:  “Do you sometimes feel that team projects suffer because people aren’t committed enough?”  86% answer ‘yes’ to this question.   In one of my previous employers, we lived through too many examples of the ‘Nortel Nod’.  Leaders in meetings, wishing they were somewhere else, reluctant to lengthen the meeting and disrupt the artificial harmony by honestly expressing reservations about a proposed solution on the table.   Post-meeting hall chatter and messaging to others usually revealed the true lack of commitment – the nod achieved its purpose to end the meeting – but it also killed the team’s opportunity to find the best route to the desired outcome.  Lack of commitment to team decisions is a huge contributor to poor team performance.  This lack of commitment has its roots in the protection of artificial harmony…. which comes from lack of trust.

Question:  “Would your team be more effective if people were better at holding one another accountable?”   89% answered ‘yes’ to this question.  Accountability in a team is a measure of the team members’ willingness to call their peer members on performance or behaviors that might hurt the team.   Team effectiveness assessments consistently show this behavior as the lowest rated of the five behaviors required for a cohesive team.  The answer to this accountability question above shows that 9 out of 10 team members believe that this hurts team performance.  This need for accountability is a tough team behavior to address – but it can be achieved if a team has trust, a respect for healthy conflict, and a commitment to results.

Question:  “Would you be content to work on a team that was harmonious, but didn’t get results?”  Only 6% answered ‘yes’ to this question – or put another way, 19 respondents out of 20 value team results more than artificial harmony.  People like being on winning teams, and go out of their way to join them… and make plans to leave those that do not achieve results.  Achieving results is the only true sign of a high performing team.  It is what team members value the most.  Great results come from holding each other accountable. This comes from commitment, which requires a comfort with healthy conflict, which is built on a foundation of trust amongst team members.

My parting plea in this column is simple.   As a business leader, put at least as much effort into developing the team, as you put into developing the individual members of that team.  Your business success depends on it – more than you know.  The employee survey results above are a strong indication that your team members want it.  Fortunately, there are powerful assessments and team interventions out here in the consulting world to help you do this.